The poems in the Genet collection Treasures of the Night will shock and offend those unprepared to accept love’s alternative practitioners. Genet would like that…. 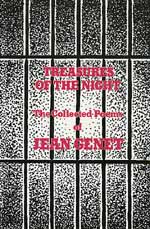 The next work from the world literature section of the 2015 reading list is an early (and problematic) translation of the collected poems of French playwright, novelist, poet, vagabond, and professional ne’er-do-well Jean Genet called Treasures of the Night. Genet is one of literature’s most celebrated “bad boys,” having been sent to a reformatory as incorrigible when he was 15 and to the French Foreign Legion, an organization with a long history of making bad boys shape up, at 18.

They failed with Genet. If anything, he became even more of a bad boy. According to conflicting accounts Genet either deserted or was kicked out of the Legion for “indecency.” The indecency involved…