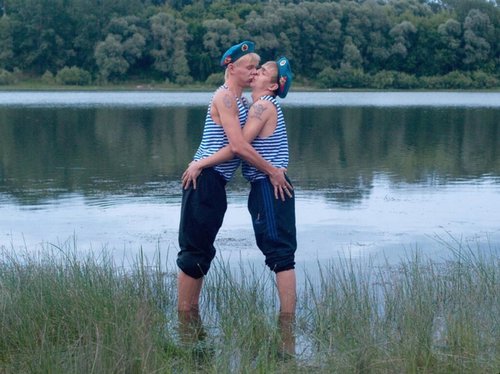 In the last few months, Russia has become notorious for its antigay stance.

<nyt_headline version=”1.0″ type=” “>Supreme Court Could Make History on Same-Sex Marriage, or Not

WASHINGTON — It is usually impossible to say when the Supreme Court will announce any particular decision. There is one exception: On the last day of the term, when the court takes action on every remaining case, the process of elimination supplies the answer.

How the Court Could Rule on Same-Sex Marriage

The last day of the term is Wednesday. The court has yet to issue decisions in two momentous cases on same-sex marriage.

Those facts in combination mean that shortly after 10 a.m. the justices will announce their rulings on challenges to two laws that define marriage to include only unions of a man and a woman.

One case, from New York, concerns the federal Defense of Marriage Act of 1996, which denies federal benefits to gay and lesbian couples married in states that allow such unions.

The other, from California, challenges Proposition 8, the state’s ban on same-sex marriage.

The rulings will come against the backdrop of a rapid shift in public attitudes about same-sex marriage, with recent polls indicating that a majority of Americans support allowing such unions. When the justices heard arguments in the two cases in March, nine states and the District of Columbia had laws allowing same-sex marriage. Since then, three more states have enacted such laws.

The New York case, United States v. Windsor, No. 12-307, challenges the part of the 1996 law that defines marriage as between only a man and a woman for the purposes of more than 1,000 federal laws and programs. (Another part of the law, not before the court, says that states need not recognize same-sex marriages from other states.)

The case concerns two New York City women, Edith Windsor and Thea Clara Spyer, who married in 2007 in Canada. Ms. Spyer died in 2009, and Ms. Windsor inherited her property. The 1996 law did not allow the Internal Revenue Service to treat Ms. Windsor as a surviving spouse, and she faced a tax bill of about $360,000 that would not have applied to a spouse in an opposite-sex marriage.

Ms. Windsor sued, and last year the United States Court of Appeals for the Second Circuit, in New York, struck down the 1996 law.

No ruling in the case on the 1996 law would require states without same-sex marriage to adopt it.

The case is procedurally tangled. The Obama administration argued that the law is unconstitutional, though it continues to enforce it. House Republicans intervened to defend the law, though it is not clear that they were entitled to represent the interests of the United States.

That leaves the possibility that no party before the Supreme Court had standing to challenge the appeals court’s decision.

The California case, Hollingsworth v. Perry, No. 12-144, was filed in 2009 by Theodore B. Olson and David Boies, two lawyers who were on opposite sides in the Supreme Court’s decision in Bush v. Gore, which settled the 2000 presidential election. The suit, brought on behalf of two same-sex couples, argued that California voters had violated the federal Constitution the previous year when they overrode a decision of the state’s Supreme Court allowing same-sex marriage.

It is also possible that the court will give no answer on the merits, deciding instead that it was powerless to hear the case because no party before it was entitled to appeal from the decisions of the lower courts. (The California officials who lost in the lower courts declined to appeal. Supporters of the ballot initiative did appeal, but it is not clear that they were entitled to step into the government’s shoes to do so.)

That last option – dismissal on standing grounds, or something similar — would lead to short-term confusion, but many legal experts say they expect it would result in same-sex marriage returning to California in a matter of weeks.

Alterar o tamanho da letra A+ A A-

As more countries propose legislation to legalize same-sex marriage, destinations and travel companies are increasingly marketing themselves to gay travelers. But John Tanzella, president of the International Gay and Lesbian Travel Association, warned that not all those who talk the talk necessarily walk the walk.

Follow @nytimestravel for tips, features and photography from all over the globe.

“Let’s say a hotel is doing an ad campaign, but they don’t have equal rights for their own employees,” Mr. Tanzella said. “You have to have your house in order before you start going after the market.”

Below are edited excerpts from a conversation with Mr. Tanzella on how lesbian, gay, bisexual or transsexual travelers can figure out what places and companies are truly gay friendly.

Q. Any resources that gay travelers can use to evaluate a company or destination?

A. You can start by checking out our Web site, which lists everything from travel agencies and tour operators to hotels, airlines, cruise lines, car rentals and restaurants and bars. Businesses who pay to be on our Web site must follow our code of ethics, which basically says they welcome LGBT travelers and will treat them with respect like any other guest.

Q. Any companies that are doing a particularly good job?

A. Some of our standout members are Delta and American Airlines, which both have their own Web sites for LGBT travelers and support a lot of organizations and charities. For hotels, Hilton, Hyatt and Kimpton, a chic, boutique-y chain, are all very engaged with gay travelers and support LGBT charities. Kimpton does specials during Pride week in June for destinations that are popular among gay travelers, and it has its own LGBT newsletters.

A. If you’re going somewhere outside of a very popular tourist destination, do research online to find out what areas are friendly, what are safe. The new State Department Web site for LGBT Americans traveling abroad is fantastic. It gives links to information on each country and other tips. It’s not a bad idea, for example, for parents to bring documents showing parentage or custody of their children when they go abroad.

We often refer travelers to International Lesbian and Gay Association (ILGA), which is based in Brussels and has a lot of information on countries: which afford protection to those who are LGBT; which do not, and even criminalize same-sex relationships.

We tell all travelers, gay and straight, that you must observe the laws and customs of wherever you’re traveling. By disregarding them, that will be dangerous for you. Now, if you’d like to do something about a law you feel is unfair, that’s when you contact ILGA, which promotes gay rights and equality around the world.

Q. In April as France legalized marriage and adoption for same-sex couples, demonstrations opposing the law intensified. Recently a Dutch-born man walking with his partner in Paris was beaten up. Should LGBT travelers worry?

A. No. Paris is a hugely popular destination for gay travelers and totally safe. Just stay away from marches where there have been incidents. Extremist groups take advantage of demonstrations to clash with police and lash out against the government.

Q. Have any places become more open to gay travelers?

A. In the last decade, a number of hot spots have emerged in South America like Peru and Brazil, and also Mexico City. It used to be only Rio and São Paulo in Brazil, but now Florianópolis has emerged as a gay destination.

Q. How do you find out about these places? Any resources you recommend?

A. Passport magazine, based in New York, is a member of ours. That’s a great gay-specific magazine on travel. And Curve, a magazine geared toward lesbians, has some great travel features and ideas, too.

A version of this article appeared in print on May 5, 2013, on page TR3 of the New York edition with the headline: JOHN TANZELLA on gay-friendly tour operators and places..