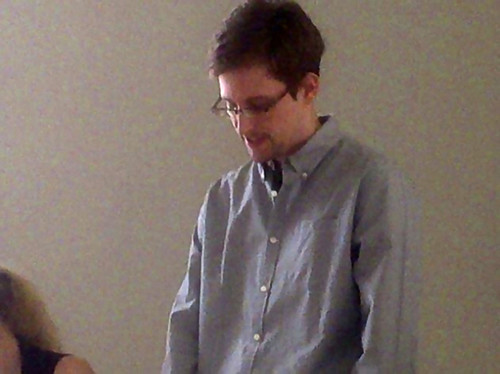 MOSCOW, Aug 26 (Reuters) – Former U.S. spy agency contractor Edward Snowden got stuck in the transit zone of a Moscow airport because Havana said it would not let him fly from Russia to Cuba, a Russian newspaper reported on Monday.

Workers packaged roses on Tuesday at an industrial farm in Cayambe, Ecuador that supplies roses to Whole Foods stores in the United States. Analysts say that if the government of Ecuador grants asylum to Edward J.  Snowden, trade between the two countries could be impacted.

By WILLIAM NEUMAN and MARK LANDLER

QUITO, Ecuador — President Rafael Correa of Ecuador has more than just the ire of United States to consider as he weighs an asylum request from Edward J. Snowden, the fugitive intelligence contractor trying to dodge American authorities.

Mr. Correa has some tangible factors to think about as well — namely Ecuadorean exports like fresh-cut roses and frozen broccoli.

In recent months, Mr. Correa’s government has been in Washington, lobbying to retain preferential treatment for some key Ecuadorean products. But that favored status, which means keeping thousands of jobs in Ecuador and cheaper goods for American consumers, could be among the first casualties if Mr. Correa grants asylum to Mr. Snowden.

While the downside for Ecuadorean rose growers, artichoke canners and tuna fishermen (whose products also get preferential treatment) is clear, the material benefits of granting asylum to Mr. Snowden are far less so. The decision could ultimately rest on the combative personality of Mr. Correa and his regional ambitions.

“The risks are enormous,” said Michael Shifter, president of the Inter-American Dialogue, a policy group in Washington. Referring to Mr. Correa, he said, “It would bring the United States down very hard on him.”

Mr. Correa, fresh off a landslide re-election victory, glories in a fight. He relishes tweaking the United States and may aspire to take on the mantle of leader of the Latin American left that was once worn by Hugo Chávez, the loudly anti-imperialist president of Venezuela, who died in March.

“Rhetorically, he aspires to be a leader, and this may be a situation that’s hard for him to resist just given his nature and his temperament,” Mr. Shifter said.

Relations with the United States have been rocky almost since Mr. Correa first took office in 2007. He stopped American antidrug flights from an Ecuadorean military base. In 2011, he kicked out the American ambassador, angered by a diplomatic cable revealed by WikiLeaks that suggested he was aware of police corruption and looked the other way.

Last year, he gave asylum in the Ecuadorean Embassy in London to the WikiLeaks founder, Julian Assange, on the grounds that he risked persecution and possibly the death penalty if he were to be charged in the United States for revealing secret State Department cables and other materials.

Last month, Mr. Correa, who has warred continually with the news media in his country, reacted angrily after Mr. Namm attended an event in favor of freedom of expression that was organized by the National Journalists Union. Mr. Correa called Mr. Namm a meddler and warned him to behave. The foreign minister, Ricardo Patiño, said darkly that the next time he might get more than just a warning.

The last sustained high-level contact between the two countries may have come in 2010, when Secretary of State Hillary Rodham Clinton visited Ecuador. During that visit, Mr. Correa told her, “We’re not anti-American; we love America,” and he described his years as a student at the University of Illinois as the happiest of his life.

But Mrs. Clinton pressed him on his government’s crackdown on the news media, and when an Ecuadorean journalist challenged him about his policies at a news conference, the president rebuked him while Mrs. Clinton watched stone-faced.

The most likely casualty of sheltering Mr. Snowden would be the trade preferences, which have been in place since the early 1990s. Originally designed for several Andean nations, Ecuador is the last remaining recipient. But the preferences, which applied to about $429 million in non-oil exports last year, expire at the end of July unless they are renewed by Congress.

That renewal was already in doubt, not least of all, officials said, because the oil giant Chevron has been lobbying hard against Ecuador. The campaign is part of Chevron’s response to an $18 billion penalty against the company ordered by an Ecuadorean court in a case over environmental damages related to oil drilling in the Amazon.

But Ecuador has begun its own campaign to keep the preferences, including a Web site called Keep Trade Going, that urges Americans to contact their legislators to ask them to vote in favor of the pact.

At the same time, Ecuador has staked out a fallback position, petitioning to include roses, frozen broccoli and canned artichokes in a separate trade program, the Generalized System of Preferences. That decision is controlled by the White House, so Ecuador is essentially asking President Obama’s help in getting around opposition in Congress.

Mr. Obama must decide by Monday whether he will include those items — a move that becomes increasingly thorny as the standoff over Mr. Snowden continues.

The question remains how heavily Mr. Correa will weigh such economic considerations.

“It is something that will adversely affect the Ecuadorean economy,” said Dan Restrepo, an adviser to Mr. Obama on Latin American policy until last year. “But I don’t know whether it’s enough to stop him.”

Analysts said that if Mr. Correa gives asylum to Mr. Snowden the United States could also try to isolate Ecuador politically, asking allies in the region to step up pressure on issues like press freedom. The same weekend that Mr. Snowden’s asylum request was made public, Mr. Correa signed a new media law that critics say would quash much critical coverage of the government.

But Orlando Pérez, the director of El Telégrafo, a government-owned newspaper, said that granting asylum to Mr. Snowden should not provoke a confrontation with the United States. “What is at play is to guarantee human rights,” he said. “Rather than hurt Ecuador it puts it in a kind of political vanguard in Latin America.”

Many in Latin America feel that the Obama administration has not made relations in the region a priority, and the episode may become another example of Washington’s waning influence.

The standoff last year over Mr. Assange, who took refuge in Ecuador’s embassy in London to escape being sent to Sweden, where he is wanted for questioning on allegations he sexually assaulted two women, gave Mr. Correa a chance to portray himself as the defiant leader of a tiny country standing up to a world power. Mr. Snowden’s request allows him to do the same again.

Both cases also helped Mr. Correa defend himself against charges that he is too harsh with the press, allowing him to portray himself as a champion of transparency.

Mauricio Gándara, a former ambassador to London who is critical of Mr. Correa, said the president aspired to become an admired Latin American leftist like Mr. Chávez or Fidel Castro.

“How much damage it does to Ecuador is another matter,” Mr. Gándara said. “They want to go beyond Chávez, they want to challenge the world.”

This is a Business, Wildlife, Environment and Technology Blog.

- A 10 Minute Vacation for the Soul

Look into our mirrors...You will see the most amazing things...

the only way from heart to soul

Australian Traveller that loves to "Roam" our globe, creator of ENDLESSROAMING.COM sharing the experience through word and photography. Currently residing in my home of Newtown Sydney but hope to be back on the road late 2020. Feedback / questions are more than welcome, happy travels

Croatia, the War, and the Future

Bringer of Nightmares and Storms

Art Towards a Happy Day